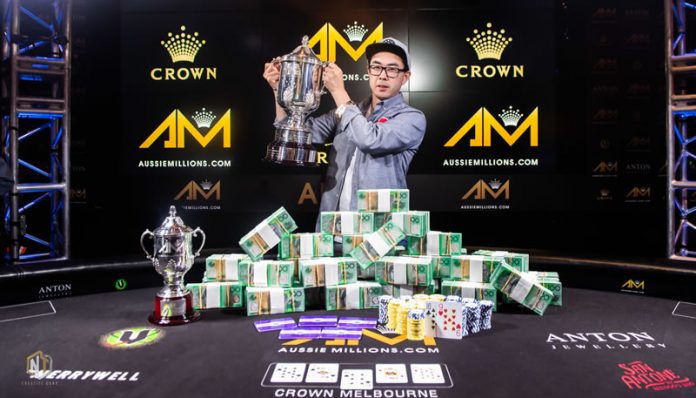 Crown Melbourne local Vincent “Wonky” Wan has emerged victorious in the 2020 Aussie Millions Main Event, conquering a field of 820 entrants to claim the top prize of $1,318,000 of a final table deal.

The Aussie Millions has been a staple on the poker calendar in January since before the poker boom, and the 2020 Aussie Millions would again return to Crown Melbourne from January 4 – 24 with a 23-event schedule.

The Aussie Millions Main Event has allowed Day 2 registration since 2012, and after three Day 1 flights, the total number sat at 803 – just 20 players shy of breaking the record that was set in 2019. In the end, the final number would reach 820 entrants to be the second biggest Aussie Millions Main Event in history. The prize pool of $8.2 million would see the final 88 players finish in the money with a first-place prize of $1,850,000 awaiting the eventual victor.

Amazingly for Del Vecchio, he just fell a few places short of reaching his third consecutive Aussie Millions Main Event final table following his fifth-place finish in 2018 and second-place finish in 2019. With the final table of seven set and taking a day off before resuming play, it would be Germany’s Nino Ullmann holding the slight chip lead over fellow countryman Oliver Weis.

The final table began with chips being exchanged freely between all seven players, and it would take until after the first break for the first elimination to occur when Nicolas Malo exited in seventh-place to chip leader Ullmann. Weis was unable to gain any traction after arriving at the final table second in chips, and he was eliminated in sixth-place to Gareth Pepper who took the chip lead into dinner break. Erik Seidel sits fourth on the All Time Money List with over US$37 million, and he would have to settle for fifth place after being eliminated by Wan.

Wan then took control four-handed before Ullmann was eliminated next. The remaining three players agreed on a three-handed deal before continuing to play for the title of champion, ANTON Jewellery bracelet and Aussie Millions trophy. Pepper and Ngoc Tai Hoang traded doubles before Pepper exited in third place. Following an incredibly lengthy heads-up duel, Wan scored three doubles after being the underdog, and on the final hand outdrew Hoang one more time to be crowned the 2020 Aussie Millions champion.

“I can’t believe my luck,” Wan said to Crown Melbourne Tournament Director Joel Williams. “Thank you to all the other players. It’s ten years of my life just grinding and working and trying to get here. I can’t believe I did it.” 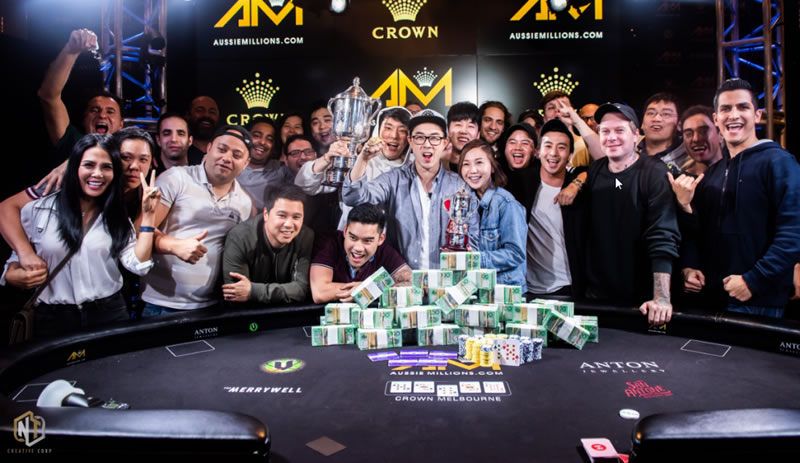 Wan has been a regular in cash games and tournaments in the Crown Poker Room for over a decade. His previous biggest result was at the 2008 Aussie Millions where he won the $1,100 Opening Event for $142,302. The local grinder and family man has two young boys at home, and can now forever call himself an Aussie Millions champion.