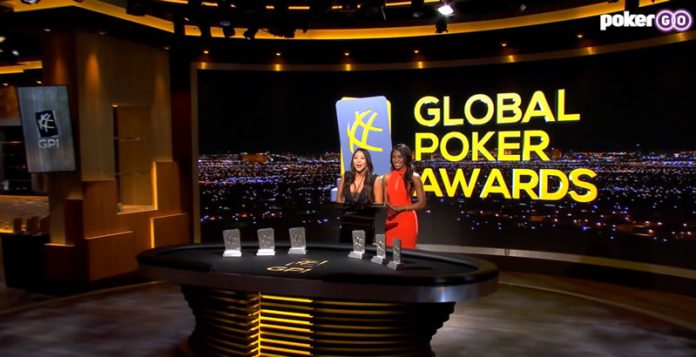 The 2nd Annual Global Poker Awards were held inside the PokerGO Studio on Friday night in Las Vegas with Robert Campbell winning 2019 Breakout Player of the Year, while The Double Down’s own Tim Duckworth accepted the Award of Merit on behalf of tournament reporters.

The Global Poker Index (GPI) kicked off 2020 by announcing all the national GPI Player of the Year winners which included Kahle Burns and Connie Graham for Australia, and Hamish Crawshaw and Sosia Jiang for New Zealand. Following a new and improved voting system, the 2nd Annual Global Poker Awards would expand to present more than 20 awards as the show was streamed for free on PokerGO.

“The Global Poker Index team is hard at work on this expanded Global Poker Awards event, filled with new awards and experiences for attendees and the viewing audience,” said Eric Danis, GPI president. “We’re delighted that the Global Poker Awards have become a repeating annual event that is growing in scope and significance among the poker industry.”

Campbell’s fellow nominees included Spain’s Ramon Colillas, England’s Ben Farrell, and American George Wolff. Campbell won two WSOP bracelets on his way to collecting the 2019 WSOP Player of the Year award. Colillas won the PokerStars Players Championship for US$5.1 million and cashed 18 times. Farrell broke through and won the Zynga Poker WPT500 Las Vegas and followed that with a win in the Goliath Phamous Poker Series Main Event on his way to collecting 25 cashes for 2019. Wolff won over US$1.6 million for 2019 which was highlighted by a British Poker Open win and nine top three finishers on his way to collecting 23 cashes.

Although none of the GPI Breakout Player of the Year nominees were in attendance, it would be Campbell being awarded the GPI trophy. Campbell left a video message which opened with a joke at the expense of Burns.

“Thanks so much to the Global Poker Index,” Campbell said. “This is fantastic and I’m so honoured to be here even though I’m not here. Sorry about that. I couldn’t be happier. People are asking me, ‘Rob what are you going to do next year with all this great stuff that has happened to you?’ Well I’m going to try and win another bracelet because this necklace is pretty tight.”

With the Global Poker Award nominees finalised in advance, one award wasn’t public knowledge until the night of the show. GPI President Eric Danis presented the Award of Merit to all tournament reporters, and it would be Australia’s Tim Duckworth accepting the award on behalf of his colleagues around the world.

“We want to firstly thank the GPI for recognizing our contribution to this industry,” Duckworth said. “Thank you to our wives, husbands, boyfriends, girlfriends, and family members who have supported our careers as some of us are on the road more than we’re home. We also want to thank everyone that has given us an opportunity and hired us. From casinos and poker tours, to poker media sites, and other publications – we all appreciate you immensely for giving us a chance.”