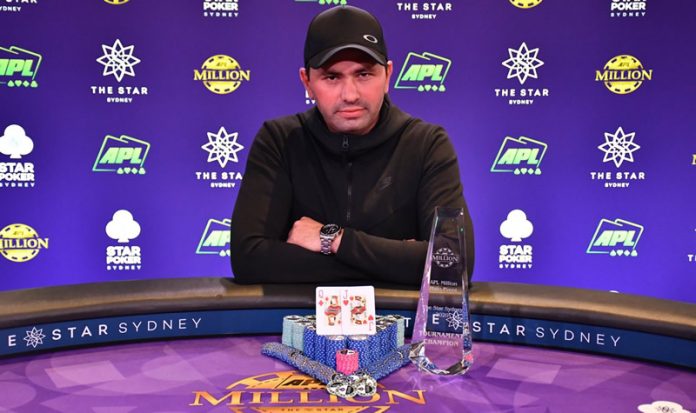 The 2020 APL Million has been won by Kiavash Arbabi at The Star Sydney after he defeated James Broom heads-up to win the $315,000 first-place prize in the record-breaking Main Event.

The 4th Annual APL Million was held at The Star Sydney and saw a 10-event schedule that awarded over $3 million in prize money from February 29 to March 9. The marquee event of the series was the $1,500 buy-in APL Million that featured a $1 million prize pool guarantee and four starting flights.

Last year’s APL Million attracted a record-breaking 1,294 entrants that created a $1,617,500 prize pool. Sydney’s Hussein Hassan would be victorious defeating Peter Curtin heads-up to capture the $300,000 first-place prize. This year’s APL Million would break the record set previously when a total of 1,404 entrants took a seat to create a prize pool of $1,755,000 that would pay the top 144 players.

Following the four starting flights, just 337 returned for Day 2 action, and heading into Day 3, only 41 players remained with action continuing until the final table was reached. The final nine would be led by Kiavash Arbabi with 10.9 million, followed by 2008 Melbourne Poker Championships winner James Broom with 8.9 million – both of these players being the clear leaders with nearly half the chips in play heading into Monday’s final table.

Scott Wilson would be the first player eliminated when his two pair was outdrawn by Luke Collins’ rivered straight. Gary Mills would shove the turn with ace-high but run into Arbabi’s trips to exit in eighth place before John Camilleri was all in with pocket eights but ran into queens to be eliminated in seventh.

Six players headed on break with Collins now holding a sizeable chip lead with 13.5 million, and when play resumed, Bradley Tojic would see his ace-queen run into Broom’s kings to be eliminated in sixth. After a lengthy period of chips being passed back-and-forth, Ben Zhang would fall in fifth place when his ace-queen ran into the pocket jacks of Collins. Josh Norvack was then eliminated in fourth place when his ace-three couldn’t outdraw Broom’s pocket nines. Collins would then be eliminated in third place when he was all in on the flop with a flush draw. Collins spiked it on the turn, but Broom found a fourth club on the river to make a bigger flush to leave the APL Million down to the final two with Broom holding a 27.3 million to 14 million chip lead over Arbabi.

Arbabi fought back into the lead, and on the final hand he would defend the big blind with queen-jack and flop a Broadway straight against Broom’s top pair and straight draw. Arabi check-called the flop, check-raised the turn, then shoved the river – and after a long tank, Broom called all in and was eliminated in second place.

Previous to Arbabi’s victory over the 1,404-entrant field for the $315,000 first-place prize, his biggest result was a 2017 Aussie Millions final table where he finished in seventh-place for $20,045. With a career dating back to 2015, Arbabi has wins in a $330 Weekly Wednesday tournament at The Star, and a $330 High Roller at the WPTL Quarterly Poker Championship.

* Image provided courtesy of the APL and The Star Sydney