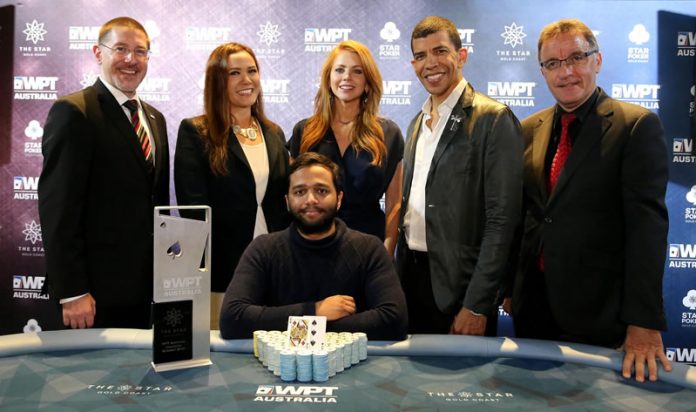 The first ever WPT Australia has been won by Hari Varma after he topped the 658-entrant field at The Star Gold Coast to capture the $274,247 first-place prize.

The World Poker Tour announced a partnership with The Star Gold Coast in late May to host the inaugural WPT Australia from October 4-7, 2019. Although the WPT has had a long relationship in the Asia-Pacific region with stops in the Philippines, Cambodia, India, Korea, Japan, Vietnam and New Zealand, this would mark their first trip Down Under.

“The World Poker Tour is proud to add WPT Australia to our roster of wonderful global events and The Star Gold Coast as a casino partner,” said Angelica Hael, VP of Global Tour Management for the World Poker Tour when the event was first announced. “As a native Australian, I am thrilled to have a WPT event take place in my home country and even more pleased to have it hosted at such a wonderful property.”

The WPT Australia festival ran from September 27 to October 7 with 10 events on the schedule highlighted by the $2,500 buy-in WPT Australia Main Event. Day 1A saw 77 players survive from the 261 entrants, while Day 1B attracted 316 entrants with 119 players surviving. The final flight saw level lengths cut in half as 40 players survived from the 81 entries, to give a total of 658 entrants and a $1,480,500 prize pool that paid the final 83 players.

Although space on Day 2 was limited for the 236 returning players, the day would come to a close with just 15 players remaining and Day 1A chip leader Hari Varma in the lead as the likes of Didier Guerin, Daniel Hachem, Minh Nguyen, Luke Edwards, Octavian Voegele, Ricky Kroesen, Ash Gupta, Angel Guillen, Dennis Huntly, Hamish Crawshaw, Oliver Gill and Joe Hachem all finished in-the-money.

The final day of play would see two early eliminations with Andy Lee and Aussie Millions champion Shurane Vijayaram hitting the rail before cricket legend Shane Warne’s fairy tale run would end in 12th place. Once the final table of nine was reached, Varma still held the chip lead and would instantly add to it when he eliminated TDD’s own Joshua Bell in ninth-place on the first hand.

A steady stream of eliminations occurred until heads-up play was reached with Varma holding just under a two-to-one chip lead over George Psarras. Heads-up play wasn’t a strung-out affair as the final hand saw both players turn trips, and when all the money went in on the river, Varma had improved to a full house to be crowned the WPT Australia champion.

Being crowned the first-ever WPT Australia champion, Varma collects the $274,247 first-place prize and WPT trophy while taking his lifetime tournament earnings to just over US$266,000. His career winnings include a plethora of cashes at his local casino of Crown Melbourne, a few results at Crown Casino Perth, and a few from some time spent in Las Vegas.