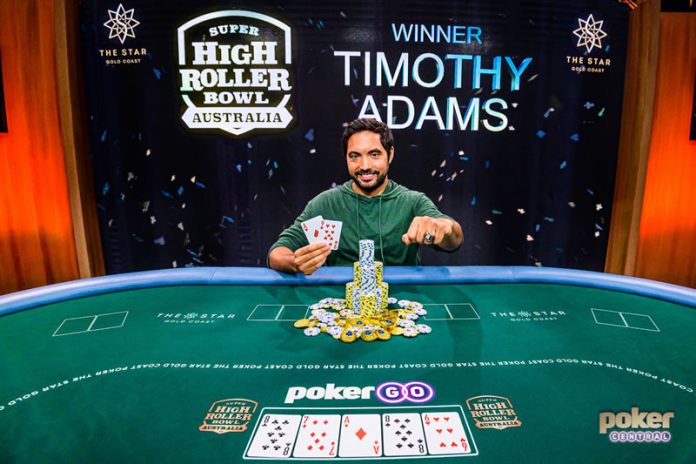 On the back of the successful seven-event Australian Poker Open, a total of 16 entrants would take a seat on Day 1 of the $250,000 buy-in Super High Roller Bowl Australia to create a prize pool of $4 million that paid the top three players.

There would be 12 unique players in the event, and once registration closed, only 10 players remained with play scheduled for just two more levels. A flurry of eliminations saw 2018-19 GPI Player of the Year Alex Foxen, Australian Poker Open Event #5 winner Stephen Chidwick, Orpen Kisacikoglu, Mikita Badziakouski, and Seth Davies all eliminated to leave just five players heading into Day 2.

Elio Fox held a commanding chip lead with roughly a third of the chips in play, but once play resumed on Day 2, it was all downhill for the 2011 WSOP Europe Main Event champion. Fox ran an unsuccessful bluff against Australian Kahle Burns, and then a few hands later turned a set but lost to Burns’ runner-runner straight to be eliminated in fifth place.

WPT champion Aaron Van Blarcum made a move from the small blind but ran into Burns’ pocket nines. No help came for Van Blarcum, and he was eliminated on the money bubble in fourth place. Burns held the chip lead with each player now in the money, and it would be Super High Roller Bowl London champion Cary Katz eliminated in third place when he was outdrawn by Canadian Timothy Adams.

Burns would sit with a near three-to-one chip lead over Adams, but out of the gate, Adams began closing the gap before he found a double holding a flush against two pair. Burns would be down to just nine big blinds, and although he found a double, he would soon be eliminated in second place after being unable to outdraw Adams’ suited-ace with his suited-queen. Burns pocketed $1.2 million in prize money following his hot start to 2020 that includes winning the partypoker MILLIONS UK Super High Roller and the Aussie Millions 100k Challenge.

“There is a ton of prestige to winning a tournament like this,” Adams said. “It makes it extra nice and I’m really pleased right now.”