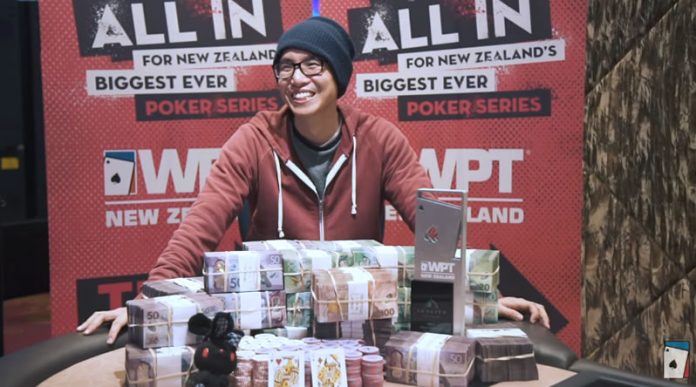 Ken Chan has collected his third career cash by breaking through to win the WPT New Zealand Main Event for NZ$153,200 in prize money.

The previous year saw Nauv Kashyap top the record-breaking 360-entrant field to capture the NZ$169,200 first-place prize. The 2019 instalment would see two starting flights attract a total of 333 entrants to create the NZ$666,000 prize pool that paid the top 36 finishers.

With 119 total players returning for Day 2, play progressed until the money bubble was reached when Daniel Birch was eliminated in 37th place. Birch was all in holding king-queen against Tim Jenkins and his ace-king. Birch flopped a queen, but Jenkins turned a Broadway straight and Birch was eliminated.

Play continued until the final table was reached with Ken Chan holding a dominating chip lead over his final table combatants. The final day of play kicked off with Gary Bignell eliminated in ninth place as Renae Baker followed him out the door shortly after. A steady flow of eliminations would follow as Glen Young and Adrian Stockman were eliminated by Chan before John Pye exited in fifth place to leave just four players remaining.

Chips passed between the final four for just over two hours before Fotios Mandakos was eliminated by Chan in fourth place. Nearly another two hours would pass before Chan eliminated Simon Thwaites in third place to enter heads-up play with a two-to-one advantage over Sarah Saifi.

Both Chan and Saifi flipped chips back and forth over the 90-minute heads-up duel before the final hand played out. Saifi shoved 14 big blinds from the button with an ace and Chan called with queen-jack. The board would see Chan make a runner-runner straight to eliminate Saifi in second place, while he would be crowned the WPT New Zealand champion.

For Chan’s efforts in winning WPT New Zealand, he takes home the NZ$153,200 first-place prize for his third lifetime cash following one at the 2006 Melbourne Poker Championships, and a runner-up finish at the 2018 Festival of Poker NZ$750 Opening Event.

* Image and video provided courtesy of the World Poker Tour