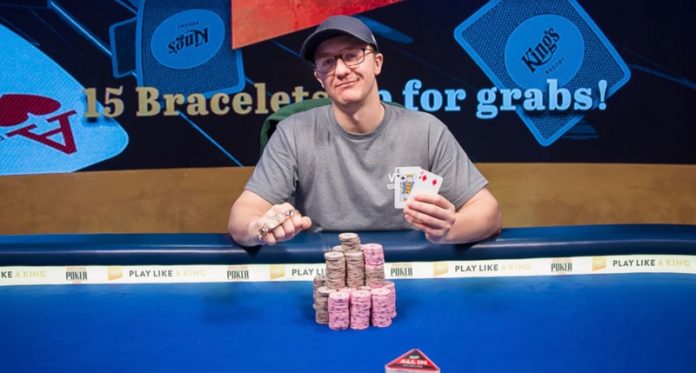 The 11th Annual World Series of Poker (WSOP) Europe was held at the King’s Casino in Rozvadov, Czech Republic, for the third consecutive year and featured a 15-event schedule running from October 13 to November 4, 2019. With the highlight of schedule being the €10,350 Main Event kicking off later in the week, eyes would be turned to the Event #8: €25,500 Platinum High Roller featuring a €1 million prize pool guarantee.

With registration open through two levels on Day 2, a total of 83 entrants would take a seat to smash the guarantee, creating a prize pool of €1,971,250 that paid the top 13 players. Day 2 would see play progress to the money bubble where Johannes Becker would the unlucky player heading home empty-handed when his ace-jack was outdrawn by his opponent’s ace-six.

Cary Katz, Christopher Frank, Anthony Zinno, and Daniel Negreanu were all eliminated shy of reaching the final table, and after Laszlo Bujtas, Australian Robert Campbell, and Anton Morgenstern were eliminated, play would end with six players remaining. Australian Kahle Burns held a commanding chip lead with 41% of the chips in play, while 2019 WSOP Main Event champion Hossein Ensan sat in second with over a quarter of the chips in play.

The final day of play would be a short one lasting just over two hours as Burns immediately extended his lead out of the gate before doubling Sam Trickett. Trickett would eliminate 2018 GPI Player of the Year Alex Foxen in sixth place, and shortly after Timothy Adams would fall in fifth place. Hakim Zoufri would be eliminated in fourth place in a three-way pot that saw Trickett triple into the chip lead as a result. Ensan would fall in third place to see Burns enter heads-up play with Trickett holding the lead.

Chips bounced back-and-forth between the two before a preflop raising war saw Burns table queens to be leading against Trickett’s ace-queen. The board blanked out, and Trickett was down to just two big blinds and was eliminated the next hand when his seven-high couldn’t improve against Burns’ king-high.

Burns collected the €596,883 first-place prize after topping the 83-entant field to win his first WSOP bracelet, while also becoming the 21st Australian to win the coveted WSOP gold.

This is also Burns’ third biggest career result following his third-place finish in the 2017 Triton Poker Super High Roller Series Macau Main Event for HK$10,151,000, and his fourth-place finish in the 2019 EPT Barcelona Super High Roller for €639,560. Following this win, Burns now sits with US$6.43 million in lifetime tournament earnings to close the gap behind Joe Hachem on the Australia All Time Money List.