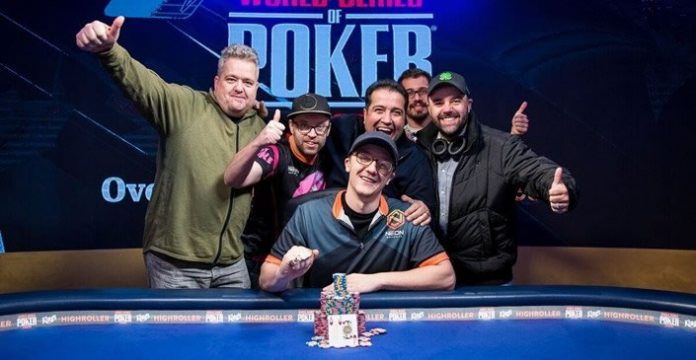 A whirlwind week for Kahle Burns at WSOP Europe has seen the Australian claim his second WSOP bracelet after defeating Germany’s Manig Loeser heads-up to win the €2,500 Short Deck Event for €101,834.

There would be 147 players on Day 1 as just 35 players finished with chips in their bag, but registration remained open until the start of Day 2 as the field reached the 179-entrant mark. Once play reached the money bubble, there would be a double elimination that saw Australian Tony Guoga and Germany’s Ismael Bojang eliminated on separate tables to share the 27th place money.

As is the case with most short deck tournaments, play continued at a fast pace as a constant stream of eliminations would occur down to the final table as the likes of Julien Martini, Ryan Riess, Phil Ivey, John Cynn, Benny Glasser, and Australians Warwick Mirzikinian and Sam Higgs were all eliminated in the money but fell short of the final table.

Kahle Burns was at his second final table for the week, and he would enter as chip leader like in Event #8 when he won his maiden WSOP bracelet. Pierre Neuville fell in seventh place when his trips went down to Manig Loeser’s straight. Oshri Lahmani would have his kings cracked to fall in sixth place, and just a few lands later Vladimir Peck hit the rail in fifth place running into Burns’ pocket jacks. Federico Anselmi exited in fourth-place when he was outdrawn on the flop, and when Felix Schulze fell in third place, Burns held a five-to-two chip lead over Loeser.

Heads-up play would last just two hands when Loeser was all in holding king-jack to be in dominated shape against Burns’ ace-jack suited. Burns flopped an ace and Loeser missed his straight draw and was eliminated in second place, while Burns collected his second WSOP bracelet this week!

Burns pocketed €101,834 for his second WSOP bracelet and joined the likes of fellow Australians Michael Addamo, Mel Judah, and Robert Campbell as two-time WSOP bracelet holders. Following his two WSOP Europe bracelets this week, Burns has moved his lifetime tournament earnings to US$6.54 million and is making a run up both the 2019 GPI Player of the Year leaderboard as well as the WSOP Player of the Year leaderboard.