The second largest WSOP Main Event in history has been won by Germany’s Hossein Ensan who topped the 8,569-player field to capture the US$10 million first-place prize and title of 2019 World Champion.

The 50th Annual World Series of Poker (WSOP) held from inside the Rio All-Suite Hotel & Casino in Las Vegas, Nevada, consisted of a 90-event schedule with buy-ins ranging from US$400 to US$100,000 and tournaments played both live and online at WSOP.com. However, the marquee event on the schedule as always was the US$10,000 buy-in Main Event that featured three starting flights, and registration open until the start of Day 2.

Although the opening two days would run as expected, Day 1C would bring some chaos before ending on a high. Two players were disqualified early in the day before a 7.1 magnitude earthquake rocked the Rio as an early dinner break was called. Once play concluded, Day 1C would break the single-day attendance record of just under 5,000 players. Once registration closed on Day 2C, the field would reach an incredible 8,569 players to be the second largest WSOP Main Event in history behind the 8,773 set way back in 2006.

With a prize pool of US$80,548,600 created that paid the final 1,286 places and left $10 million reserved for the eventual champion, some of the Australian and New Zealand players to finish in the money included Jeff Lisandro, Martin Kozlov, Murray Chick, Naz Sibaei, Craig Blight, Gary Benson, Bobby Zhang, Shaun Zammit, Michel Bouskila, Matthew Maks, Sosia Jiang, Luke Martinelli, Paul Hockin, Hongbin Guo, John Lombardo, Stevan Chew, Michael Marvanek, Daniel Neilson and Daniel Hachem. Warwick Mirzikinian would be the longest lasting of the Trans-Tasmans as he finished in 20th place for US$324,650 after he three-bet shoved deuces and was called by Nick Marchington and his ace-king. An ace on the turn would end Mirzikinian’s run as the Sydneysider collected his biggest career score and moved his lifetime tournament earnings to over US$1.1 million.

Once the final table of nine was set, it would be Germany’s Hossein Ensan holding a commanding chip lead with 177 big blinds ahead of his nearest rival Garry Gates who sat with 99 big blinds. With the final table to play out over three days, the first day saw just five players remaining with Ensan and Gates still on top. When Gates was eliminated in fourth-place, it would leave an international contingent to battle three-handed. Canada’s Alex Livingston was eliminated in third-place when his ace-jack lost to Ensan’s ace-queen. Heads-up play lasted 100 hands, and when Italy’s Dario Sammartino shoved the turn holding a flush and straight draw, Ensan called with his overpair and the river bricked out to see him crowned the 2019 WSOP Main Event champion. 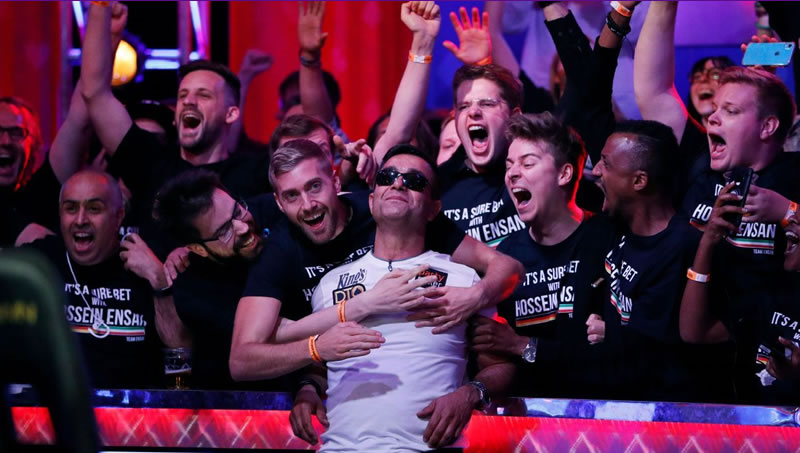 “This is the best feeling in my life! Unbelievable! I am so happy I’m here with the bracelet in hand. What can I say?”

Ensan is the second German champion in WSOP history following Pius Heinz winning the 2011 WSOP Main Event. He is also the third Iranian-born Main Event winner after Monsour Matloubi (1990) and Hamid Dastmalchi (1992). The 55-year old Ensan is the oldest player to win the Main Event in 20 years after Noel Furlong won in 1999 at 61 years of age.

Although he is accomplished on the European circuit, Ensan now sees his lifetime tournament earnings jump to over US$12.68 million with results including an EPT Prague title, a WSOP International Circuit victory, and now the WSOP bracelet every poker player is chasing.