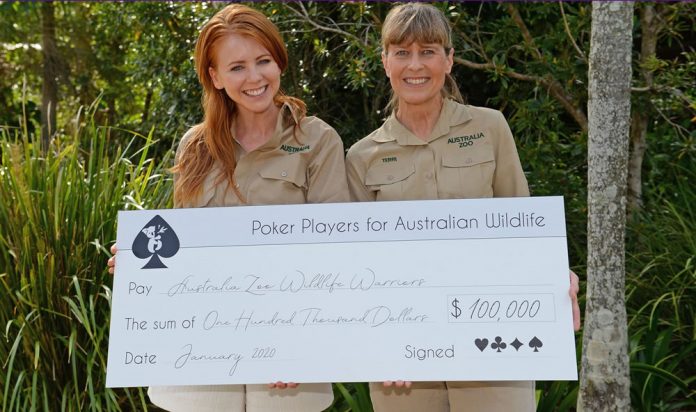 The Australian summer is normally filled with days at the beach and backyard cricket, but this year a devastating wave of bushfires struck the nation prompting the government to declare a state of emergency. Fires spread throughout the country and killed Australia’s most precious wildlife, destroyed people’s homes, and burned through over 25 million acres of land.

It is estimated that over 1 billion animals were killed in the Australian bushfires, and the damage done to Australian tourism and local business will be likely be unknown for months to come.

People from around the world donated to the Australian bushfire relief. Celebrities, movie stars, musicians, and even corporations such as Amazon and Facebook donated. Closer to home, Crown Resorts pledged $5 million to bushfire fighting services and community support efforts. The next to follow would be a group of poker players led by WPT Anchor and recent Australian Poker Hall of Fame inductee Lynn Gilmartin.

I’ve been to the @wildwarriors animal hospital. The work they do is PRICELESS. They are helping victims of #AustralianFires right now. Rehab is expensive and lengthy. Poker players, let’s show the koalas (and many more species) our generosity. 🙏🐨🙏 https://t.co/xytnLkvy1L pic.twitter.com/SoIVJ9jI7r

“Sometimes we may not be able to afford a financial donation or aren’t experienced enough to go and fight fires or care for wildlife,” Gilmartin said. “But there are countless ways humans can help in their own zones of expertise. For me, it’s marketing and communication, so that’s what I did by promoting the fundraiser and reporting on the fires.”

Many poker players joined Gilmartin in donating to the Poker Players for Australian Wildlife fundraiser. Players donated percentage of action in tournaments and online grind sessions, but it would be fellow Australian Poker Hall of Fame inductee Kahle Burns that used his voice and poker skills to kick the fundraiser into another gear.

Australia is on fire.
Area burned is 120% the size of the Netherlands.
800 million animals dead.
If anyone donates $500.I will do a 2hour group coaching lesson for free.Retweet & Tag for awareness. Links below. https://t.co/R42y8R9sPUhttps://t.co/tAyNLn2fbY pic.twitter.com/PD3N89eUrC

“Kahle played a huge role in our fundraiser hitting well over $100k,” Gilmartin said. “While he generously donated financially, he wanted to encourage others to help too, so he offered online coaching for donations of $500 or more. The response to that was amazing.”

As January came to a close, Gilmartin had the honour of visiting the Australia Zoo on the Sunshine Coast to hand them a check for $100,000. Gilmartin’s efforts in the Poker Players for Australian Wildlife fundraiser saw over 700 donators across a multitude of platforms totalling roughly $115,000 that went to Wildlife Warriors. Many others donated through other charitable organizations, and although the exact number of donations and money raised is unknown, Gilmartin can’t be praised enough for her charitable endeavours.

What a HUGE honour to visit @TerriIrwin @BindiIrwin @RobertIrwin @chandlerpowell9 & the entire @AustraliaZoo family of @wildwarriors to hand over our donation! 😭😻 Your money is going so far. I will post a video soon! THANK YOU for supporting Australia.🙏 https://t.co/xytnLkvy1L pic.twitter.com/4i5eGJ65OG

The poker industry is often wrongfully perceived by outsiders. In an instance however, they can display great kindness and generosity to get behind a charitable endeavour that hits close to home. Gilmartin, Burns, and the hundreds of poker players that donated to the Poker Players for Australian Wildlife fundraiser are all indebted by the Australian people that have been so devasted by the Australian bushfires this summer.