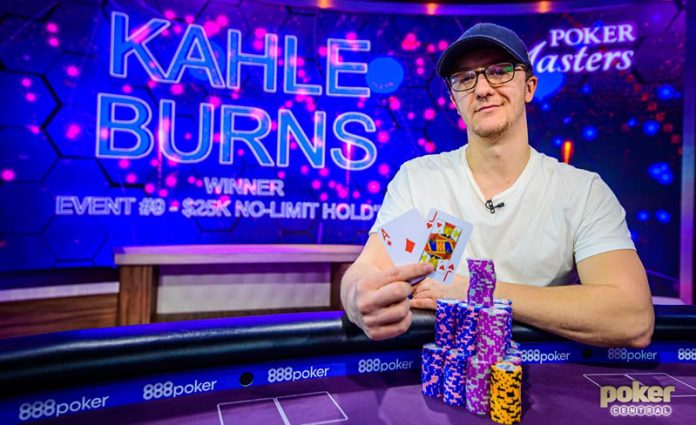 Australian Kahle Burns continues to announce himself on the world poker stage after victory in the Poker Masters US$25,000 No-Limit Hold’em Event for US$416,500 in prize money.

The third annual Poker Masters held inside the PokerGO Studio at the ARIA Resort & Casino in Las Vegas, Nevada, is a ten-event series featuring a mix of buy-ins and poker variants. The penultimate event of the series was the Event #9: US$25,000 No-Limit Hold’em, and it would be Australian Kahle Burns claiming victory and the US$416,500 first-place prize.

The likes of Isaac Baron, Ryan Laplante, Jonathan Depa, Jared Bleznick, Julien Martini, Kristen Bicknell, Sam Soverel, and Sergi Reixach had all scored a Poker Masters title in the first part of the series, and with just two events remaining, a total of 49 entrants would take part in Event #9 to create a US$1,225,000 prize pool that paid the final seven places.

Like all Poker Masters events, Event #9 followed the structure allowing players two re-entries as registration closed at the start of Level 10. Once the final nine players redrew to one table, Ben Yu and Cary Katz would be eliminated to leave the final seven players in the money. One more elimination would be needed before play concluded for Day 1, and it would be 2018 GPI Player of the Year Alex Foxen exiting in seventh-place at the hands of Burns.

Defending Poker Masters Purple Jacket winner Ali Imsirovic held the chip lead when the final table resumed, and although he took some hits straight away, he would find a double back into the lead before David Peters fell in sixth place. Elio Fox was eliminated next by Burns when his queens were rundown by ace-seven. Sam Soverel lost a flip to Burns and would be eliminated in fourth place before Sean Winter was eliminated the next hand to leave Event #9 heads-up.

Burns held the chip lead over Imsirovic, and although the overnight chip leader mounted a comeback, it would end when he was all in holding a dominated jack. No help came for Imsirovic, and he was eliminated in second place, and Burns collected his first Poker Masters title.

“If you look at the final table today, everyone’s been there before and it’s a jovial bunch and guys that don’t mind having a laugh,” Burns said to Maria Ho on the PokerGO final table coverage. “Things are pretty chill even though we’re playing for a lot of money. I think it makes the experience much more enjoyable instead of a bunch of robots in a staring contest and I definitely enjoy the table talk.”