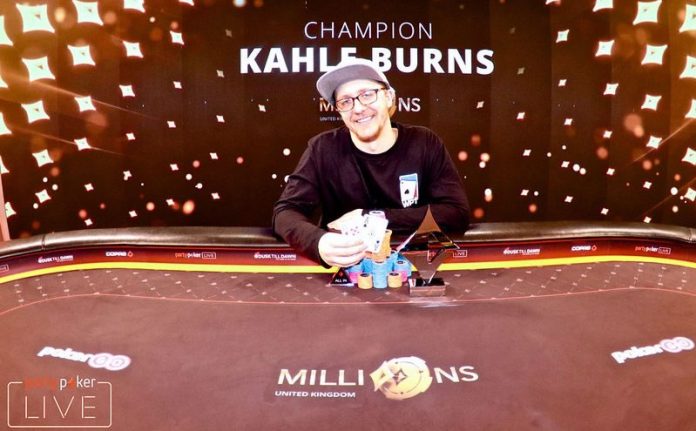 Australia’s Kahle Burns continues to dominate the high stakes poker world with victory in the partypoker MILLIONS series in the United Kingdom worth US$350,000.

The partypoker MILLIONS series kicked off 2020 at Dusk Till Dawn in Nottingham, England, with a nine-event MILLIONS UK schedule.

The third event of the series was the US$25,500 buy-in Super High Roller that attracted 37 entrants and created a US$897,250 prize pool that paid the top five places. Day 1 ended with ten players remaining, but registration remained open. Day 2 would see the field swell from the 23 to the final 37 entrants, and when partypoker MILLIONS World Bahamas champion Adrian Mateos fell in 10th place, the final nine players redrew to one table.

Rainer Kempe, Yair Bitoun, and Leon Tsoukernik all fell to the rail before Day 1 chip leader Luke Reeves would be eliminated on the money bubble by current chip leader Igor Kurganov. With the final five players all guaranteed $75,000 in prize money, it would be Steve O’Dwyer exiting in fifth place at the hands of Kurganov.

With Kurganov holding a roughly three-to-two lead over his three opponents combined, it would be Norway’s Preben Stokkan eliminated in fourth place when his suited ace was dominated by the ace-king of Ben Heath. Unfortunately for Heath, he would be eliminated in third place to leave Kurganov heads-up against Burns with the Russian holding a near three-to-one advantage.

Burns outdrew Kurganov in several key pots to move into the overwhelming chip lead before the final hand. Kurganov limp-shoved the button with pocket fours, and Burns raise-called with ace-ten. Burns turned a Broadway straight to render Kurganov drawing dead and eliminated in second place.

For Burns’ victory in the partypoker MILLIONS UK Super High Roller, he collects US$350,000 in prize money following his 78th place finish in the MILLIONS Mini just a few days earlier.

Closing out 2019, Burns held the lead in the GPI Player of the Year race, but it would be Alex Foxen winning his first WPT title to jump into the lead and win his second consecutive GPI Player of the Year award. Following that close call, Burns has begun 2020 in the right way by collecting another high roller victory to move his lifetime tournament earnings to over US$9.33 million.