Australia’s leading Daily Fantasy Sports player, “JayK123”, has created history by becoming the first Australian to become a DFS millionaire after winning over US$1 million in the DraftKings Millionaire Maker contest.

For the first time an Australian player has reached the pinnacle of the Daily Fantasy Sports, as daily fantasy sports legend JayK123 has become the first Australian player in to win a million dollar prize with victory in the DraftKings NFL Millionaire Maker on the Divisional Weekend of the NFL playoffs.

In an exclusive chat with dailyfantasyrankings.com.au, JayK described the emotional and physical toll the DFS grind has taken on him and that he was exhausted and relieved when the tournament was all over.

“This was the type of slate where I thought it was a good idea, especially in the milly maker, to get pretty out there.” 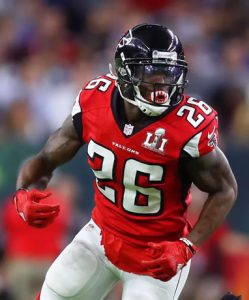 Jay was able to roster running back Tevin Coleman (4%) (pictured right) and tight end Hayden Hurst (2%) at low ownership who both hit for ceiling games on day one.

He was able to change his side by loading up on wide receivers, (swapping players within the salary cap before lock is allowed on DraftKings) to more of a chalk side on the second day of the contest.

As Jay explained on the DFR podcast, he tried a different strategy for other teams outside the Milly Maker itself.

“This was the type of slate where I thought it was a good idea, especially in the milly maker, to get pretty out there. I kinda felt my teams were so out there for the Milly Maker that I thought, alright I’m just going to hedge a little bit, and put together a second set of teams and enter them in all the other stuff.”